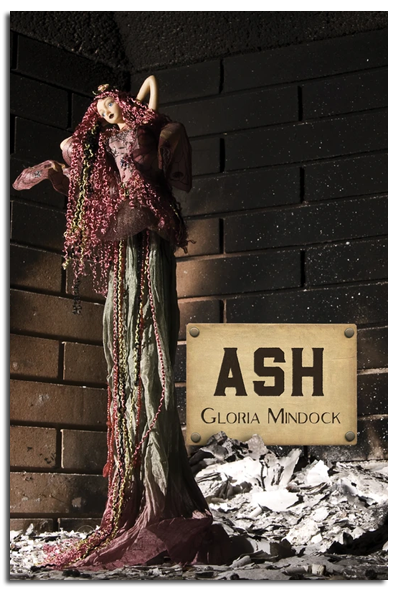 With the passage of time, consciousness expands from the center we’re made to believe we are, to a sphere of awareness back toward ourselves, self-knowledge, with its pains and gift of empathy for the world around us. It isn’t us acting upon the world so much as the world reflecting back at and through us, forging the spirit in us. This is a subtle sense hovering about the more direct and passionate appeals in Gloria Mindock’s new book, Ash (ISBN: 978-1-941783-75-7, 2021, Glass Lyre Press, LLC, Glenview, IL), a sense which emerges in a pristine still moment in the poem Room, with its lament of diminishment and disintegration as being part of the inheritance of the world of facts:

Walking into the living room
the TV, couch, pictures, chairs,
are all watching me.
Watching every move, every gesture…
So powerful, my bones shudder…

All they can do is watch a web being
weaved in the dark.
I am sorry, but this room matters… (page 30)

Beyond this room, and the book it is in, we know Mindock’s awareness goes out to the suffering, not the lavish worldly world which the prophets denounce, but the world where 4 out of 5 human beings live in low-stability situations, many in areas of poverty, disease, starvation, climate detriment and in armed conflict. Her previous books, I Wish Francisco Franco Would Love Me (Nixes Mate Books), Whiteness of Bone (Glass Lyre Press), Nothing Divine Here (U Soku Stampa) and Blood Soaked Dresses (Ibbetson Street) carry on, in poet and critic Tim Seurmont’s adequate words, “her examination of brutality and its toll on humanity,” from personal relationships to the great political demons of dictatorship, the Spanish Civil War and the atrocities in El Salvador.

At one stunning moment in this more personal collection of laments of the dissolutions of farewell, the poet reminds us (and herself) of her mission, after Carolyn Forché, as a witness:

The fact is people will go on brutally
killing each other.
Who will take my place and write about it? (page 47)

For the greater part, however, this book is different in its paradoxically localizing and generalizing focus. It becomes a practiced poet’s objective (reminiscent of T. S. Eliot, also associated with fire and ash) beyond the arrangements of words, to make the world at large personal to the reader. These poems do that by intensifying the immediate sphere of their speaker, in complaint and lament after lament, especially in the first section, Burnt, about the debris left by fire. In days we are hearing so much about climate change, it’s not a far leap to understand the metaphorical encompassment of the burned element, especially as the image becomes a haunting refrain, like the one piano key struck over and over in Stanley Kubrick’s Eyes Wide Shut:

Smoke is everywhere.
Down to the floor… (page 2)

The crackling was so loud, it hurt my ears…
Things got smokier, battling the embers with
false waters… (page 4)

The house became ash from the couch burning,
the windows shattering, the glass breaking
into air.

The fireman’s foam, water puts the flames
out that engulfed us.
Long sentences burned my skin.
No bandages helped… (page 6)

In the odd intimations – “Long sentences burned my skin” – we gather little by little that this isn’t only literal fire and smoke Mindock is talking about. It is intimate – even to the art she practices, writing, with its “Long sentences.” And, as we’ve mentioned about climate change, this fire is, as classically portrayed through the myth of Prometheus, about the technological harvest of our society and how it pervades the essential element, air:

My skin was burned by your compulsion
to be famous.
Poor thing, the numbers look bad for you.
Somehow, you crashed into the roof and it buckled.

Life is a conviction for us… (page 7)

2017 and 2018 Poet Laureate of Somerville, which boasts one of the highest rates of published authors per capita in the United States, Mindock has exerted great influence in Somerville and Boston – and beyond. Her press, Cervena Barva, celebrating its 16th anniversary this year, is one of the most productive small presses around, with the special boast of authors from more than a dozen foreign countries around the world, many of them Eastern European. In turn, Gloria’s poetry has been published into eight other languages. The press, with a studio location in the Somerville Armory for the Arts, is a hive of activity for poetry including readings and roundtables, which have continued via Zoom during the pandemic. She is the recipient of the Allen Ginsberg Award for Community Service by the Newton Writing and Publishing Center and has come away twice with the Moon Prize from Writing in a Woman’s Voice. And this is just a short list of her accomplishments and appreciations for community enhancement.

“I hide from you in ways/you’ll never know,” she announces in the poem Exit (page 23), piquing our curiosity with the sleight-of-hand expression. James Merrill exalted the turn of phrase as one trademark of the good poet. In Ash, along with the too-late alarms sounded and their distancing echoes of grief, we also get flashes of verbal wonder that uphold Mindock for the daring and stubbornly original poet she is:

The family deputizing the body

And, amid all the bitterness, giving passage to the acknowledgment of the mysterious union that resonates beyond separation:

There is an equation between us…you = me.
Some things are beyond the dark room we entered.
It is spring, and we released each other into the blossoms. (page 50)