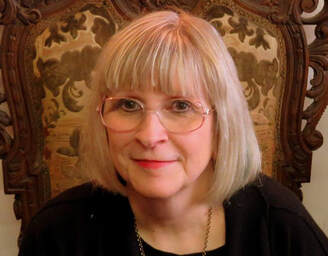 Gloria Mindock is the founding editor and Publisher of Červená Barva Press, owner of The Lost Bookshelf book store, and one of the USA editors for Levure Litteraire (France). She is the author of ASH (Glass Lyre Press, 2021), I wish Francisco Franco Would Love Me (Nixes Mate Books, 2018), Whiteness of Bone (Glass Lyre Press, 2016), La Portile Raiului (Ars Longa Press, Romania, 2010) translated into the Romanian by Flavia Cosma, Nothing Divine Here, (U Šoku Štampa., 2010), and Blood Soaked Dresses (Ibbetson, 2007).

Widely published in the USA and abroad, her poetry has been translated and published into the Romanian, Croation, Serbian, Montenegrin, Spanish, Estonian, Albanian, Bulgarian, Turkish, Macedonian, and French. Gloria has been published in numerous literary journals including the James Dickey Review, Gargoyle, Web Del Sol, Poet Lore, Constellations: A Journal of Poetry and Fiction, Ibbetson, Muddy River Poetry Review, Unlikely Stories, Nixes Mate Review and anthology. Gloria has been awarded the Ibbetson Street Press Lifetime Achievement Award and was the recipient of the Allen Ginsberg Award for Community Service by the Newton Writing and Publishing Center. She was the Poet Laureate of Somerville, MA in 2017 & 2018.

Gloria Mindock has been nominated numerous times for a Pushcart Prize, St. Botolph Award, and was awarded a fellowship from the Massachusetts Cultural Council distributed by the Somerville Arts Council. Gloria is retired as a Clinical Director and Counselor in Addictions and now freelances teaching poetry workshops and editing manuscripts.
Gloria Mindock's other extensive experience and awards
Gloria's other extensive experience and awards include editor of the Istanbul Literary Review/ILR from 2007-2011 which was based in Istanbul, Turkey.  From 1984-1994, Gloria co-founded and edited the Boston Literary Review/BLuR. She coordinated a reading series called BLuR Reads from 1984-1994. During this time, she co-founded Theatre S. & S. Press, Inc. Gloria was managing director as well as being involved in acting, singing, writing music, and text for the theatre. Theatre S. received grants from New England Foundation for the Arts, Somerville Arts Council, Massachusetts Cultural Council, Rockefeller Foundation, Polaroid Foundation, and the Globe Foundation.