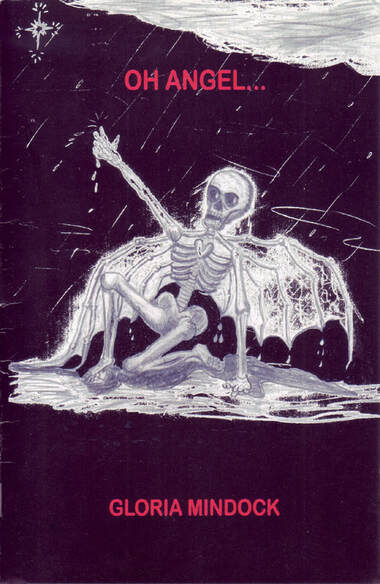 If you don't believe in angels, this compelling collection of poems about them might give you pause for thought. Among the kinds of angels Gloria Mindock addresses are male and female, guardian, loyal, and fallen angels, even a vacationing angel. As in the title poem, which opens the book, she often exclaims, "Oh angel," in conjecture, disappointment, pique, passion, or some other emotion. Angels dominate her consciousness, her moods, her actions. For instance, "Wild" begins, "Oh angel, at dawn, / I get up and sit in the nicest room," and in "Guardian Angel Sits on Left" she says, "The angel is curled against / me . . . / She protects me." But by the end of the poem, "The angel went on to / guard another." Though desirable, angels can sometimes be disloyal, like people. In "Wings" the speaker chides a traitor angel and then reproaches a lover who has deserted her: "Oh Herman-stupid man / Prodigies won't help / Poetry is necessary / just like me." This passage recalls Wallace Stevens' "necessary angel," his name for the imagination, whose necessary product is poetry. Stupid Herman "jumped out too soon," leaving the speaker at first bereft but then with a new subject for a poem, a new sense of worth. Oh Gloria, what else are lovers and angels for?
-George Held
Limited Availability - Click To Inquire
Boston Area Small Press and Poetry Scene
Review by Doug Holder
February 15th, 2006

Gloria Mindock, Somerville poet, writer, and founder of the “Cervena Barva Press” has a new collection of poetry out titled: “Oh Angel.” Mindock writes: “Inspiration for these poems come from a friend who lives in Central America. She prays to a different angel for every situation she encounters.” The angel in this collection doesn’t so much protect or even talk with the poet, but acts as a conduit for Mindock to think out loud. Mindock wrote me in an email that she has an interest in death., and she feels, at least in this country, it is feared and pushed into the background. In her poem “Bridge,” Mindock talks with the angel about our inevitable decline:

The angels are ripping our
bodies apart. They’re butchering corpses.
Look, we can’t conceal our flesh is dying.
Insects multiply in our blood.
And if this isn’t enough, we can’t
talk about it.
Hands are shaky. We are afraid of
breaking down, becoming weak, and being
killed by pity.
Silence is better.
A slight wound touches us.
We can nourish ourselves with this.

In “Vacationing Angel” the poet addresses an absent angel that she depends on for “pockets of air/we can embrace this slaughter.”

Our bones and skin are static--
trashed
In fact, if you haven’t had plenty of dreams, you
will drop off this planet
One can’t survive on knowledge
Hollow and silent, we are waiting
to die with a few pauses in-between
Nevertheless, we keep going…

Some years ago, I published a poetry collection by Hugh Fox, “Angel of Death.”
Angels, I found, can be an excellent conceit for a poem, as long as they don’t become
harp-playing ciphers. Mindock’s angel is a fount for profound ontological inquiry.