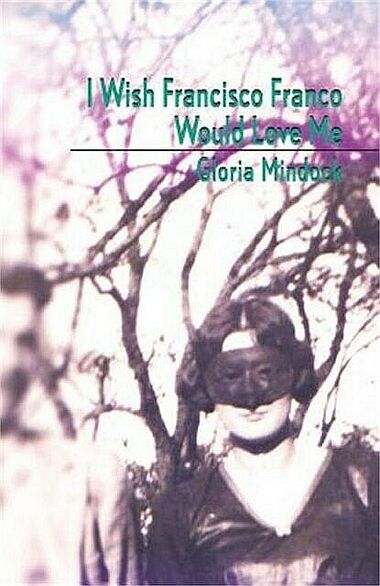 I Wish Francisco Franco Would Love Me
(Nixes Mate Books, 2018)

In her new book of poems I Wish Francisco Franco Would Love Me Gloria Mindock continues her examination of brutality and its toll on humanity. Here, her resurrected Francisco Franco leaps from her imagination to ridicule and condemn all dictators who believe they have the right to control and murder at will. Her poem “The Fruit Fly” reminds one of Osip Mandelstam’s famous takedown of Stalin. Satirical, powerful, lush and even at times displaying a certain beauty history can still carry, I Wish Francisco Franco Would Love Me will leave you thinking and changed.
-Tim Suermondt, author of The World Doesn’t Know You

Francisco Franco of Spain was responsible for the deaths of tens of thousands of people during his Fascist regime. In this collection I wish Francisco Franco Would Love Me poet Gloria Mindock remembers the victims, bringing to the pages vividly the atrocities inflicted upon them, and the trauma long after. “What matters to me is the cinders/left from flame/broken hearts and brains/trying to speak but can’t” with these words she gives us poems of witness that are both beautifully haunting and a lamentation.
-Pui Ying Wong, author of An Emigrant’s Winter
Gloria Mindock has skillfully crafted a secret history of the Spanish civil war through the voices of Franco’s wife, lovers, and victims. Each poem brings the reader inside to witness longing, unspeakable suffering, and death. In “Me” the speaker says: “Oh, it is pointless in this life,” but Mindock gives voice to the victims, she makes beautiful “the body eroding weirdly” and takes the reader on “a narrow road walked on, on a big spinning globe” where we witness “transitions gone, beyond repair” and “creation ending” with “language spoken, unspoken, irreplaceable.” In Mindock’s secret history she has resurrected Franco’s victims and questioned his wife. Franco may have “murdered memories” but Mindock has brought them back. A truly remarkable book.
-Anne Elezabeth Pluto, author of Lubbock Electric
Poet Gloria Mindock is known for her lyrical protest poems that capture the suffering of people living in dire conditions in countries under totalitarian regimes. An earlier poetry book by Mindock titled 'Blood Soaked Dresses' also explored this theme of genocides, and the terrors people were forced to endure. In this new book, however, there is a departure from the straight line. These poems are more existential in that they move the reader to the broader context of all suffering: at all times, somewhere, anywhere. There is a dark tongue-in-cheek angel of death that skips through this collection prancing about wearing (metaphorical) Prada. From Engulf: "Vulgar little man with a torn retina / lunging for a woman... / Franco, you are international. / Your name is known. / Telephone all the cats in the world and meow. / ..." That blood has spilled and will continue occupies this poet's form. Mindock is aware. She treats this subject matter with both scholarly respect and the disdain it engenders, because, after all, she's only a poet and wields no sword. Another excerpt is from her poem Waiting: "Waiting for an angel to circle, drop / threads on our faces, we cover our eyes / in this system of the obsolete / ..." Mindock's expanded vision of what is and what could be is the glue that holds these poems tight in the collection and makes the reader sit up straighter in the chair.
-Susan Tepper
Mindock’s poems are eloquent reminders of the hell of fascism and the dangers of an unhinged strongman running the show. This is a book of value and a necessary warning for those who think it cannot happen here. Highly recommended.
-Jeff Weddle
Mindock is a particularly fine poet whose many dark works awaken people to the evil conduct of dictators which is often minimized in the media and history until the brave come forth to reveal the excesses of violence.
-Zvi A. Sesling