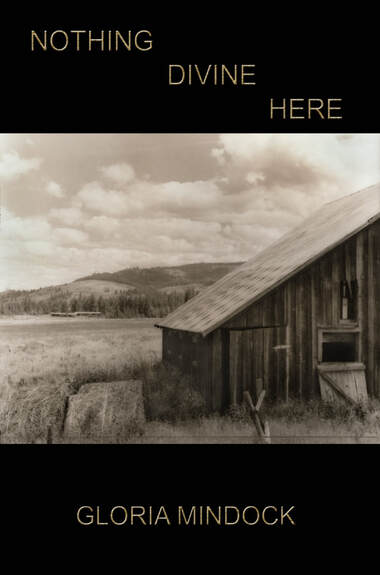 NOTHING DIVINE HERE by Gloria Mindock is all about love, but this is a hymn to the fragile heart, so true to its divinity that these poems have moved beyond plain reality into a realm of nearly Greek proportions.  “I ask you not to talk / it doesn’t matter / just listen / It is dangerous to breathe— / to shape the day into your / longing…”   Known love that has gone and the plunge into where it may be hiding.  Pain pressed to the page like butterflies saved under glass.  “Hunt me out, death / I am nothing but a touch to / this day, a memory of night / and bread for some other secret.”  A sharp left turn into another’s soul, where we’ve no right to be, yet how can one turn away from such clarity and the ghostly beauty of this language.  Mindock accepts agony as part of the human condition, and though these poems rail, they never shy away or pretend anything other than flat truth as the poet knows it to be.  “I realized one thing / about my life today / It doesn’t matter /Years from now / the company I had, will / have ceased / This planet will stop / This universe / exiled…”  There are love poems and there are poems about love.
-Susan Tepper
CLICK TO PURCHASE
More Rave Reviews for NOTHING DIVINE HERE
Nothing Divine Here
(U Šoku Štampa., 2010)

Passionate and rebellious, Gloria Mindock's poetry jumps forcefully from the page, grabs the reader by the collar of his coat and holds and hangs on to his/her attention.

In unison with the poet's heart, the nature of things is in big turmoil here, forever searching for the elusive Divine Harmony, the only force capable of rearranging the world into one of love and understanding.

In a perpetual state of sadness and grief, these poems descend to the very core of the raw discourse of the soul, devoid of artifice and pose. The stark simplicity of their statement disarms us and leaves us vulnerable in front of the bitter reality of life.
-Flavia Cosma, author of seventeen books of poetry, a novel, a travel memoir, and four books for children
Something from "Nothing Divine Here" new poems by Gloria Mindock
by Michael T. Steffen
December 21, 2010
(Reprinted from the Boston Area Small Press Poetry Scene)

Again and again readers mistake the authorship of writing. When something unpalatable comes across, we’re disinclined to read it. Poetry is a vessel from the old school, one whose techniques for navigating are subjected to the winds that blow, and the crisis which is emphatically expressed in Gloria Mindock’s new book ‘Nothing Divine Here’ in the first poem immediately announces that the dilemma is at the source or well of the inspiration, where a force like greed is being communicated so relentlessly, she can manage little more than to trace the audacity and violence coming at her, in the absence of grace and diplomacy, those gentler persuasions of the struggling heart: I don’t dream anymore I’m only a skeleton thinking about water cruelly hungering for a harvest (“Water,” p. 3). You can fool some of the people some of the time. While these poems from Gloria Mindock aren’t likely to uplift readers, they will convince their readers with their dismissal of foolery from the page. The contradictions and metaphors that Mindock finds document a frustrated transformation of spirit light, as though now cast on an inalterable, un-pliable clay. The dream of a caring response from the Buberian “thou” of her address can only be reclaimed and reabsorbed in the ceaseless presence of our physical mechanical environment. It is this pervasive. Sometimes when I sleep I dream you love me but when I’m awake your heart fills with traffic (“Empty Field,” p. 11). The observation is undeniable and subject to much of the rage which these poems express. If the artist grasps no pliancy in this inspiration, however, the stuff of art, in poetry language, is itself endowed with nuance and play. By its nature poetry, witty, paradoxical, orchestrates the relationships of its words. To take any of its statements too literally is to be trumped. The apparently pessimistic sense of the title ‘Nothing Divine Here’, while evoking the Divine, to human senses becomes as true of an image as we get when we look, say, into the source of light—an alarmingly damaged perception of a black spot which we hope isn’t permanent. “I am what I am”—much human experience has agreed is the thing the directive mystery at the center of our existence would pronounce of Him/Herself. Mindock virtually makes visible that disappearance with the title ‘(Nothing) Divine…’—Where? And the “Nothing,” set mimetically as it were beside the Divine’s stubbornness to be, exists by virtue of remaining indefinite. Nothing is also a wink at feminine determination, in the Shakespearean sense, the ribald opposite of something, that physical void which nature haunts to fill, that place of creation, and so the poet’s plangent song, sounding out anger, danger perhaps, but certainly love in the persistence to find and make expressions with this indelible obstacle of our human reflection. ‘Nothing Divine Here’ is a volume of poetry that will yield in measure with the reader’s curiosity and nearness, quintessentially exemplifying what the French critic Rolland Barthes termed the zero degree of writing, from a voice like Philomela’s through the inner ear of conscience.